Here's a link to my on-the-whistle report for The Guardian from last night's West Country derby.

Freddie Burns kept Gloucester in the game with an intelligent display at 10, but you'd be hard pressed to find any other positives for the Cherry and Whites, whose discipline was atrocious. Conceding 19 penalties away from home is never likely to end in a victory.
Posted by Tom Bradshaw at 13:59 No comments:

Drugs in rugby - a story of saints and sinners

Five Aviva Premiership players tested positive for recreational drug use last season. They were fined £5,000 each. That’s one heck of an expensive joint or line of cocaine. A strong deterrent, you would think, to those tempted to commit future abuses.

Five is a low figure – it amounts to about one per cent of Premiership players. If you contrast that to society at large, then rugby players are saints. According to the Crime Survey for England and Wales, about nine per cent of the adult population takes an illicit drug during a calendar year.

Moreover, the 2012-13 season was the first time that the RFU’s anti-doping scheme had recorded a positive test for a recreational drug since the scheme was introduced in 2009-10. And not a single positive test has been recorded for a performance-enhancing drug. Compared with the general population, rugby players’ halos really are burning bright.

But there is a ‘but’. The RFU’s anti-doping policy, administered in partnership with Premiership Rugby, was drawn up following Bath Rugby’s dark period in 2009, when five players – or, put another way, a third of the first team – received bans for either taking recreational drugs or refusing to take tests. In the wake of that, the RFU not only drew up its new policy but also – in conjunction with the players’ union, the Rugby Players Association – introduced an education programme to highlight both the dangers of drugs and the new testing regime.

In the wake of such an awareness campaign, it is perhaps somewhat surprising that five players have still been stupid enough to dabble in either cocaine, cannabis, ecstasy or amphetamines.

Following the publication of the RFU report on Tuesday, former Bath Rugby prop David Barnes, who is now director of the RPA, made a comment that blended reassurance with vigilance.

“A small number of adverse findings via the illicit drugs programme is a reminder that we can never assume the anti-doping job has been ‘done’,” said Barnes.

“It is reassuring to see another season concluded with no systemic doping amongst the senior elite players in England. They continue to be role models for the wider game.”

While a jump from zero positive tests to five is significant, it should be remembered that many professional players inhabit an environment that is virtually alien to the man on the street; an environment in which they are often lauded as giants among mortals. As Justin Harrison, one of the ex-Bath players banned four years ago, told me: “It [drugs] is an easy trap. Players have pretty high amounts of disposable income and most of the guys are being repeatedly told how invincible they are, so you push yourself to the limit, both physically and socially.”

And that’s why, as Barnes puts it, the anti-doping job is never ‘done’.

This column first appeared in The Bath Chronicle.

Posted by Tom Bradshaw at 21:40 No comments:

The oddities and contradictions of Premiership Rugby's salary cap enforcement

Have Premiership turkeys just voted for Christmas? My thoughts on Premiership Rugby's tough-talking over the policing of the salary cap.

A flimsy regulation that is easily circumvented by canny financial directors or a useful way of ensuring that Premiership teams compete on a level playing field?

Whatever your view, the salary cap remains as hotly-debated now as it was in 1999 when it was first introduced by the top-flight English clubs.

Whispers, nudges and chin-stroking surround the cap on the players’ wage bill. Sit in a rugby press box or a rugby-loving pub and the subject of which club is flouting the cap and by what means will, in the normal course of things, pop up before you can say ‘Pay-him-extra-by-slipping-a brown-envelope-in-his-training-bag-on-his-birthday-and-by-paying-his-missus-to- do-phantom-shifts-in-the-club-shop’.

Coaches aren’t immune from making nudges, either. Every so often, a director of rugby or a head coach will lob an innuendo about a breach of the cap in another club’s direction, usually in the run up to them playing that coming Saturday.

Now we all have a chance to snitch. Premiership Rugby announced this week that it has set up a salary cap hotline phone number. It’s like Crimestoppers, only for rugby. Capstoppers, you might say. Anyone with intel about a club being in breach of the £4.26million cap is urged to email salarycap@ premiershiprugby.com or call 07583 826343.

Hot air and posturing? Not if Premiership Rugby is to be believed. The umbrella group representing top sides has said there will be “increased monitoring, investigation and transparency” of the cap. Moreover, the organisation has said it will “now undertake an Investigatory Audit in addition to the current annual Salary Cap audit which can involve using independent experts, to access relevant records held by a club who are suspected of breaching the regulations”.

To my ears, that is the toughest Premiership Rugby has ever sounded on enforcing the cap. Great news, you might say.

The problem, however, is this. The salary cap is voted for by the clubs. So if one or more clubs has voted for the beefed-up enforcement of the salary cap despite being in contravention of the wage limit, then at least one turkey has voted for Christmas. But turkeys of this sort don’t vote for Christmas – not unless they have a cheeky escape route from the turkey pen already in mind.

Also, is it right that those clubs suspected of breaching the cap will have a confidential disciplinary hearing, as the current terms state?

Would the integrity of the game not be better served if the names of such clubs were made public before such hearings took place, thereby enabling those with potentially corroborating information to come forward?

But however flawed the policing of the cap might be, this muscle-flexing is welcome.

You never know, with enough calls to the hotline before Advent, one of the turkeys could be roasted by Christmas.

Posted by Tom Bradshaw at 12:53 No comments:

I spoke to Rob Baxter at the Aviva Premiership launch back in late August about his thoughts ahead of the Heineken Cup. With the Chiefs starting their European campaign on Sunday, here are the Exeter coach's views.

Drawing the Heineken Cup’s reigning champions two years on the bounce might dishearten some coaches. But Rob Baxter is warning Exeter’s Premiership rivals that playing against the very best that Europe has to offer will once again make his side a formidable proposition come the return of domestic league action.

The Chiefs won six of their final seven matches in the Premiership last season, an impressive finale that Baxter attributes to the hard lessons that Exeter learnt during their maiden Heineken campaign. 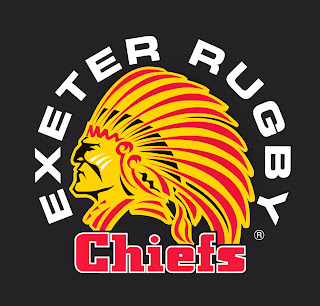 Last season, Exeter were twice beaten by 2012 Heineken champions Leinster and given a double thrashing by Clermont Auvergne. This season, 2013 winners Toulon await the Chiefs, along with Pro12 high-fliers Glasgow Warriors and Cardiff Blues.

“I think a few people think that last season’s Heineken Cup hurt us in some way, but the reality is that last year was fantastic for us,” Baxter told me.

“We had a tough group and we played every game to try and win and we learnt a heck of a lot, and I think that was reflected in the run of games we had at the end of the season.

“We were one of the form teams of the Premiership at the end of the season. We won six out of seven games and one of those games was a three-point loss to Leicester.

“That’s not a bad run of form and I believe a lot of that was down to the lessons we learnt from playing in the Heineken Cup – physically and mentally – and getting used to that kind of intensity.

Baxter admits qualification to the Heineken Cup’s knock-out stages is a tall order, but believes the battle-hardening experience is invaluable.

“People have spoken about progression from the Heineken Cup, but the reality is we’ve still got Toulon – the current champions – just as we had Leinster last year,” said the Exeter head coach, whose side kick off their Heineken Pool 2 campaign on Sunday by hosting the Blues.

“Cardiff seem very buoyant on their new pitch and Glasgow were one of the form teams in the Pro12 last season.

“It’s not necessarily about where we finish but about how we perform and the attitude we show.

“I’m not too worried about the Heineken Cup as regards what it brings us in rewards as an individual competition. What’s important is that we go after every game flat out like we did last year.”
Posted by Tom Bradshaw at 21:08 No comments: