Nevermind the GDP figures, what about the increase in the Premiership Rugby salary cap?

On the day that the International Monetary Fund announced it was upping its growth forecast for the UK’s economy to a dizzying 2.4 per cent, the players and agents of English rugby were mulling over a rather more significant increase in the funds available for their payment – 11.7 per cent.

That's the increase in the salary cap announced by Premiership Rugby Ltd, taking the wage ceiling per club up to £5 million for the 2014-15 season.

The topic of the salary cap  is an old favourite of mine. Will the latest increase mean bigger squads for Premiership sides, or will it just result in the same number of players receiving more dosh (along with their agents, of course)? My thoughts are here.
Posted by Tom Bradshaw at 21:56 No comments:

England say flanker Tom Wood will still be in contention for their 6 Nations opener with France, despite being sent for scans following a training ground clash of heads.

Wood has not trained with the Red Rose squad since the injury scare on Tuesday, which was caused by a clash with backrow colleague Tom Johnson. However, England yesterday said that, prior to the accident, Wood had been scheduled to take Thursday and Friday off in any event.

The initial concerns were that Wood could have broken a cheekbone, but tests revealed the Northampton Saints star, who skippered England on last summer’s tour of South America, had suffered no broken bones and was not concussed.

England will monitor Wood as he returns to camp this evening but confirmed yesterday that they expect him to be in contention for selection for ‘Le Crunch’ at the Stade de France on Saturday.
Posted by Tom Bradshaw at 21:50 No comments:

Back in the saddle after crossbar accident

With the exception of a riveting trip to Welford Road on Sunday, it's been a relatively quiet spell for me since I popped to Kingsholm for The Independent to cover what was one of the most abysmal Premiership matches of the season - a game redeemed only by the collapse of a crossbar by a giant inflatable ball during some pre-match horseplay by club sponsors dressed up as reindeers: 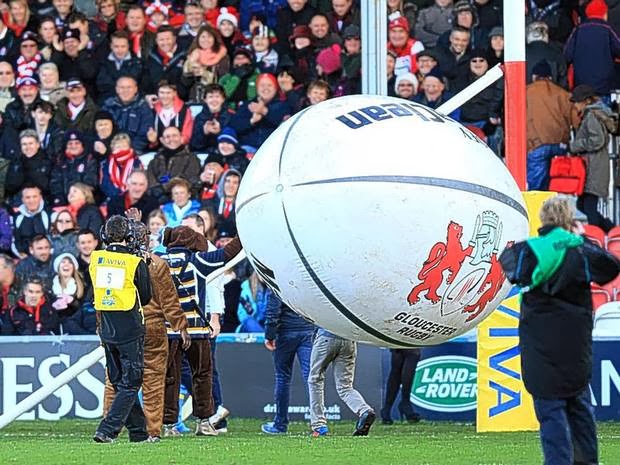 Anyway, after an extended exercise in festive indolence, I'm properly back in the saddle this weekend. It's Newport-Gwent Dragons V Bath for The Rugby Paper and BBC Radio Bristol tomorrow, followed by commentary at Bristol v Aberavon in the British & Irish Cup on Sunday. Scotland and Bristol prop Kyle Traynor will be summarising alongside me. As ever, tweet me your views mid-match.
Posted by Tom Bradshaw at 20:59 No comments: