James Simpson-Daniel believes European Champions Cup rugby next season is within Gloucester's reach - but claims a top-four finish is likely to be beyond the club.

Former Gloucester wing Simpson-Daniel believes new head coach Johan Ackermann is giving the Cherry and Whites' pack more bite, but says they remain a little short in depth in the outside backs.

“Johan inherited a side that’s been coming in the bottom three for the last few seasons, but Ed Slater has been a great signing and that doggedness up front has won them games," said Simpson-Daniel.

“Ackermann’s judgement has been spot on. He’s focusing on building a bigger, nastier pack.

“It’s a shame Ross Moriarty is leaving but Ruan Ackermann is very similar to Ross, and the good thing is Johan is using youngsters like Jake Polledri and keeping them in the team to reward them for their good performances.”

“A side finishing in the top six is structured around winning at home and picking up some points on the road, and I think that is happening,” said Simpson-Daniel.

“As for top four, no, I don’t think Gloucester are title contenders yet.”

Since Jonny May’s departure to Leicester on the eve of the new season, Simpson-Daniel believes Gloucester have been light at wing - a situation that has not been helped by recent shoulder injuries to Ollie Thorley and Henry Purdy.

“It’s an area where Gloucester are less strong,” said Simpson-Daniel. “It’s an understatement to say that when Jonny decided to leave it wasn’t ideal timing.

“Gloucester were left behind in strength and depth in that position." 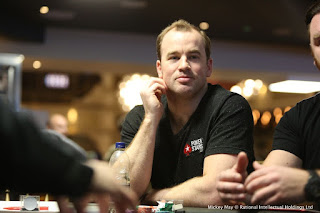 James Simpson Daniel was playing at the PokerStars Festival London. Join the world's most popular online poker sites at PokerStars and visit BetStars News for a full Six Nations preview.
Posted by Tom Bradshaw at 10:13 No comments: