Fronting up to England's problems 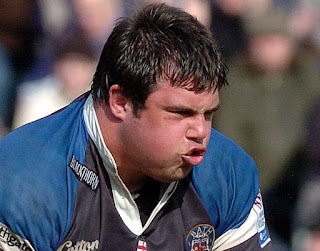 Does anyone, even Martin Johnson, know what's going on in England's front-row? With Julian White - who has been sidelined since October with a hamstring tear - preferred ahead of Duncan Bell, and the out-of-form Tim Payne also in the EPS, I can't help feeling England are going to be mightily vulnerable up front in the Six Nations.

My interview with Duncan Bell on Tuesday only served to stregthen my view that the England management are in a muddle about what to do in the front-row.
Posted by Tom Bradshaw at 11:33 No comments: Links to this post 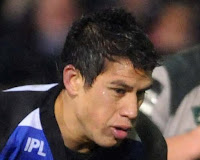 Funnily enough, the start of my career as a rugby writer coincided with the start of Shontayne Hape's career in rugby union. Fifteen months ago - after he scored his first try for Bath (against Sale in the Anglo-Welsh Cup) - I interviewed him at Edgeley Park.
And a nicer, more grounded gent you could not wish to find.
That's why I wasn't surprised when Bath coach Steve Meehan praised Hape's modesty and work ethic yesterday, just minutes after it was announced that the 28-year-old had been picked by Martin Johnson for England Six Nations campaign.
There's nothing of the Cipriani Syndrome about Shontayne. A family man with two young boys, the New Zealand-born centre isn't going to let his ego balloon now the media's lenses and microphones are pointed in his direction.
Read my interview with Meehan here
Posted by Tom Bradshaw at 16:21 No comments: Links to this post 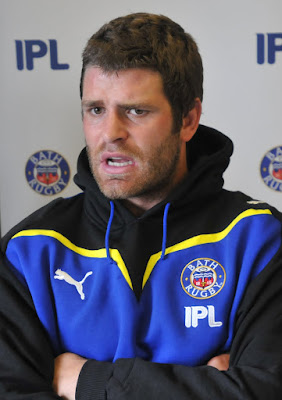 Below is an interview I did with Bath Rugby's new signing Luke Watson, a man - it turns out - of many parts. By a country mile it was the most absorbing rugby interview I have ever done. Hope you find the piece equally absorbing...

Luke Watson leans back in his chair and turns over his left arm. Bath Rugby’s latest signing is about to give me a tour of his body art.


“This one says ‘Habakkuk 3:17’,” he intones in his deep, clipped South African accent. Glancing up, he then fixes my gaze and recites the passage from the Old Testament.


Luke Asher Watson, who sports three other religious tattoos, including an enormous cross on his right bicep emblazoned with the words ‘Eternal Freedom’, is not your ordinary interviewee. But then he’s not your ordinary rugby player. Nor, for that matter, is he your run-of-the-mill human being.


Watson’s demeanour is a blend of the impatient military general and the tell-them-how-it-is preacher. His fierce brown eyes, tousled hair and unshaven face give him a slightly ascetic look. On introducing myself, I get the impression he doesn’t suffer fools gladly.


His physical appearance may be eye-catching, but the most interesting thing about Luke Watson is what happens when he opens his mouth.

Every sentence is spoken as though it contains some vital nugget of information, as important for the listener as it is for the speaker. There is an intensity and passion in his delivery, as though he is uncovering a new truth for himself with every word.


And what’s abundantly clear is that rugby is very far indeed from being this man’s number one priority.


“But my faith is the foundation of my life. I put everything behind that. It comes first above rugby, above my life, above my enjoyment, above any other factor. I do not put that in a compartment. It’s with me on the field and off the field and wherever I go.


“At the age of 17 I wanted to go into full-time ministry, whatever that may be. I wanted to travel the world and go where nobody else wanted to go. I wanted to go to the ugliest, darkest, meanest, most disgusting places and really get involved on my hands and knees in the most terrible things and really help, because God has given me the heart – a sensitive, compassionate heart – where I tend to feel very deeply for others. Even watching certain movies, I’ll tell my wife ‘Turn it off’.


“I do believe that, somehow, in some way, God will give me opportunities to help and hopefully bring some social justice through spiritual conviction.”


Doing God’s work – which for Watson means helping those on the margins (while living in Cape Town he used to feed and clothe the city’s homeless) – is clearly more important to the 26-year-old than chasing a ball around a muddy field. And if you understand that about the man, then some of the comments that got him into so much hot water back home in South Africa can be understood in a fresh light. For these so-called political outbursts were, in fact, just manifestations of his faith.


The son of outspoken anti- apartheid campaigner Cheeky Watson – who believes that South African rugby’s Springbok emblem should be dropped because of its associations with the country’s apartheid past – Luke has courted controversy in his homeland for the past two years. Alleged remarks about the Springbok jersey making him want to vomit catapulted him into an unwelcome limelight, as did his inclusion in the South African team for political reasons. Public criticism by the likes of John Smit and Victor Matfield didn’t help.


Watson picked up 10 unhappy caps for South Africa. He has acknowledged that his decision to leave for England may well have ended his prospects of future representative honours.


But the loose forward – who last month was named the Currie Cup’s Player of the Season for his inspirational captaincy of Western Province – doesn’t seem to care. For he’s convinced that he has been brought out of Africa for the glory of God.


“The timing was miraculous,” he says. “I was in negotiations with Western Province, they were desperate to keep me. Within a week Bath popped up and within a week I’d made my decision.”


With a nod in the direction of last season’s Bath captain, Michael Lipman, who quit the club last spring amid allegations of drug-taking, Watson continues: “Someone who played in my position left and they were looking for someone with certain attributes and characteristics – I managed to meet most of those.


“Everything I’ve ever faced in my life, the only way I came through was by realising that there’s a God in heaven who protects me, who watches me and who most of all loves me. He has the best plans for me.”


Watson, a tee-totaller who cites the “many grey areas of modern society” for his abstention, takes his faith onto the rugby pitch in an obvious way.


“Even when I’m on the field I’m continuously praying. Praying that God would give me revelation, give me insight, show me things – where the gaps are, where the weaknesses are in defence and help me be in the right place at the right time.


“A lot of the time people look at me and think I’m talking to myself, but I’m actually praying on the field.”


Does Watson take such fervour into the dressing room, I wonder. Will he be handing out copies of the New Testament after training sessions?


“A lot of the players have picked up very quickly what I’m about, who I’m about,” he says. “When beers are offered and they ask why I don’t want one I tell them, when they see the tattoos they ask what they mean.


“I’ve played rugby for many years and the last thing the world needs is a judgmental, condemning Christian full of judgment left, right and centre. I’m not here to evangelise, I’m here to play rugby, but when the opportunity arises where I can help people in any manner – whether it be a kind word or encouragement, or if they want to know something – I’m there.


“I’m very tentative to preach too quickly in a situation because you don’t want to get people’s backs up. I remember at my wedding standing up in front of 300 people and saying, ‘I don’t want to offend anyone, but the one thing that my wife and I are about is loving Jesus Christ’.


“If God calls me to hang up my boots tomorrow and calls me to go into some of the most terrible places in the world – the most poverty-stricken countries – and give up everything…” The sentence tails off before Watson adds: “I’m very fortunate He’s given me a platform like this where I can shine his light.


“I’m not based on religion – rules and regulations – I’m based on love and freedom.”


Watson has really warmed to his theme now. So much so that I can’t help wondering just where all this thundering moral energy would be directed if he didn’t have his faith.


“God is my closest friend,” he continues. “God is the love of my life. When I wake up in the morning He’s the first thing I think about when I go to bed at night, it’s the last thing I think about. It’s the one thing my wife and I have that will hold us together for ever, that we are united in our passion – relentless pursuit – of that which God has in store for us.”


He may have captained a South African province, played for his country and must surely be Bath Rugby’s next skipper but Watson does not believe that rugby will provide him with an abiding happiness.


“Life has to be bigger than just the here and now and yourself,” he explains.

“If I’m so self-centered and just focusing on what I can achieve and what can bring me fame and what I can gain from life, then I’ll get to the end of my life and feel I led a very unfulfilled, unsatisfying life.”


So, here’s the paradox at the heart of Luke Watson the rugby player. He has a proven record of inspiring rugby teams but deep down he knows rugby just isn’t that important.

He may be something of an enigma – an anomaly, even – but he’s an enigma every Bath fan will be happy to see running out on to The Rec.
Posted by Tom Bradshaw at 12:19 1 comment: Links to this post