Need to rejunenate your career? Then get a ban 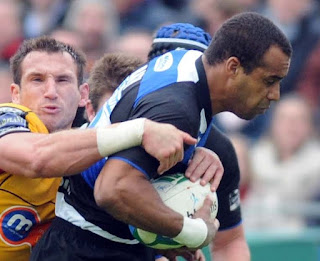 What with Michael Lipman's deal with Melbourne Rebels, Alex Crockett's contract with Bristol and now this, it seems that getting a ban from the RFU for drugs-related charges no longer dents career prospects.
Posted by Tom Bradshaw at 11:59 No comments:

It's mind-bending that Bendy isn't in England squad 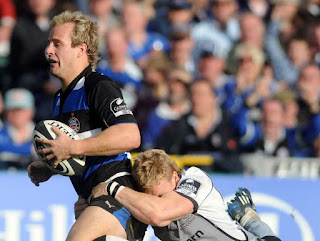 I’m sure I’m not the only one who’s been left scratching his head at the inclusion of the out-of-form, ineffectual Delon Armitage in the England squad for the tour to Australia at the expense of the in-form, intoxicatingly exciting Nick Abendanon.
The full-back has been key to Bath’s resurgence this season. The fans recognise it, head coach Steve Meehan recognises it and his team-mates certainly recognise it. That’s why he was voted the Players’ Player of the Year at the club’s annual awards dinner on Monday evening.
Abendanon is a game-changer. Ever since he began scoring tries for fun in 2006, his elusive running from deep has been his trademark. His ability to spot the gap and dance his way through it is a gift. He has worked on that gift and, as recent moments of magic have shown, his ball carrying is becoming even more potent.
The statistics from this year’s Guinness Premiership speak for themselves – get the ball in Abendanon’s hands and he’ll cause havoc.
Such line-breaking potential is precisely what England need. There has been much talk about how the Red Rose squad needs a player of Jason Robinson’s ilk if it is to be in a position to compete for next year’s World Cup in New Zealand. From any spot in England’s back three, Robinson could burst his way though opposition defences.
And while Abendanon may not be as explosive as Robinson, the effects are similar – men in his wake and the gain line broken.
But Nick Abendanon is now much more than a dangerous runner in broken play.
Earlier this season, he and Bath skills coach Brad Davis realised that he needed to improve some core skills if he was to reassert his claim for an England shirt.
Abendanon knuckled down to improving his catching under the high ball, as well as his kicking from hand.
After the rest of the squad had finished their training sessions, Abendanon and other members of the Bath back three would hang back. Davis would line up tackle bags and then put up high ball after high ball. The aim of the exercise was for the players to catch the bombs without knocking over the bags.
And the drill has clearly worked.
The Bath back three have been rock solid under the high ball of late with Abendanon – despite not being the tallest of men – excelling.
The 23-year-old picked up the last of his two England caps in 2007. And while his confidence was a bit wobbly during the early phases of this season after some poor decision-making, his performances ever since he extended his contract in February have been a joy to behold.
He is surely in the form of his life.
“From Bath’s perspective the guy who has been most spoken about this week is Nick Abendanon and we all feel he has been very unlucky not to make the Australian tour,” said head coach Steve Meehan.
It’s not unlucky – it’s unjust.