Bendy's on the straight and narrow 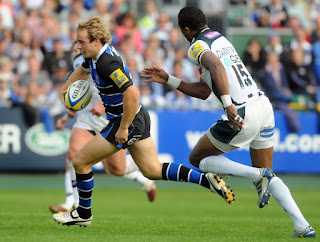 I've long championed the cause of Bath full-back Nick Abendanon. And in a week when the 24-year-old has been called up to the England Elite Player Squad, there is therefore the opportunity for this blog to let out a small cheer.
Sure, Abendanon only got the call after Delon Armitage (both pictured) threw a strop in front of a doping official and got himself banned.
But Abendanon has his foot in the door now - the first step in anyone establishing themselves in any walk of life. The question is, does Abendanon have it in him to get himself over the threshold and settle in at England’s 6 Nations base at Pennyhill Park in Surrey?
I believe he does. The South Africa-born flyer used to be known for two things: his elusive, weaving running, and his unfortunate capacity to make daft decisions at crucial moments.
Fortunately, the elusive running bit still applies. And while the odd decision can still creep into his game, Abendanon is a far more consistent specimen than he was two years, or even a year, ago.
His defensive play is also under-estimated. For a relatively small guy, he punches a couple of divisions above his weight.
There are two recent examples of that, both in the Heineken Cup. Away against Aironi, Abendanon decked the rotund Nick Williams with such technically superb savagery that the Number 8 was escorted off the pitch to receive medical treatment. On Saturday, in Biarritz, he felled the marvellously named centre Marcelo Bosch when only a perfectly executed tackle would do if a try was to be prevented.
But apart from his own form, there are two other reasons why Abendanon should prosper.
Going into the World Cup in September, England team manager Martin Johnson wants versatile players in his squad who can cover more than one position. It is to Abendanon’s significant advantage that he can play on the wing as effectively as he can at 15.
Over the summer, his exertions for the England Saxons in the Churchill Cup - when he appeared on the wing - won him the Player of the Tournament Award.
His ability to play anywhere in the back three is a big plus-point, just as it is in Matt Banahan’s favour that he can play at centre as well as on the wing.
The presence of Banahan and other Bath players in the EPS should also work in Abendanon’s favour.
With Banahan and Shontayne Hape next to him, it will be like playing in the Bath back line. Things augur well for Bendy.
Posted by Tom Bradshaw at 16:08 No comments: 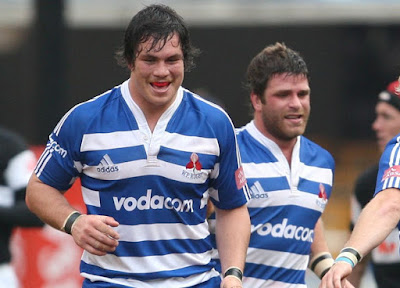 On Thursday I broke a story about Springbok Francois Louw being lined up by Bath Rugby to replace the departing Luke Watson.
The story, it seems, is gaining traction in South Africa. As I write, it's the lead on www.sarugby.com.
But, as somebody points out in the comments section on that website, aren't we capable of producing loose forwards of sufficient quality in England?
Bath are not short of young, up-and-coming back-rowers, with home-grown starlets Guy Mercer and Josh Ovens leading the charge. I can't help feeling that the club's insistence on travelling around the southern hemisphere in search of an 'international-calibre' star to replace Watson is a kick in the teeth for these young guys, who have been knocking on the door for a good while now.
Moreover, an all-international back row can be a dangerous thing in World Cup year. Should Bath sign Louw and should Simon Taylor get a recall from Scotland - as his form merits - then Bath's entire first-choice back row of Moody, Taylor, Louw could be away at the start of the 2011-12 season.
Then the home-grown lads really will have to stand up and be counted.

Picture: Francois Louw, front, and Luke Watson during their days playing together for Western Province and The Stormers. Credit: Steve Haag, Back Page Sport SA
Posted by Tom Bradshaw at 10:10 No comments:

When the human being eclipses the sportsman 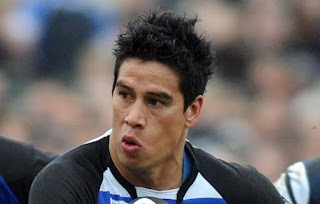 Sports interviews, particularly in football or boxing, are all too often either choreographed hype or bland platitudes.

Personality is hijacked to make way for some PR message and that message often boils down to meaning the square root of sod all.

Earlier this week, however, I was fortunate enough to interview England's Shontayne Hape. By his own admission, the Bath centre has hit a sticky patch.

He has come in for plenty of stick of late and while he has been way off his best, some of the criticism has smacked, frankly, of the amnesiac.

What most impressed me about Hape, pictured, on Tuesday was his honesty. So often the sportsman can eclipse the human being. Occasionally, we need to be reminded that the human being bit comes first.
Posted by Tom Bradshaw at 09:59 No comments:

South African knight rides to the rescue at The Rec - again 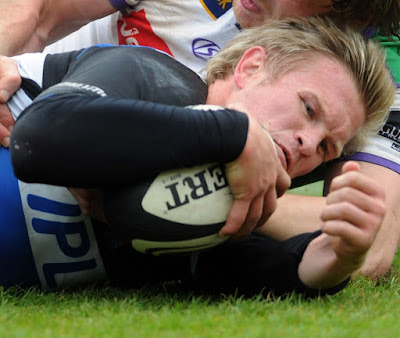 Former Springbok scrum-half Michael Claassens has today signed a deal that will keep him at Bath Rugby until 2013. Here's my take on the signing. For an interview with Claassens and more of my thoughts, see The Bath Chronicle on Thursday, January 6.

A very good history of Bath during the rugby club’s heyday has recently been published. But when the final word comes to be written on Bath Rugby in the 21st century, it will be a modest South African who couldn’t speak English when he arrived in the city who should receive a chapter all of his own.
For the second time in his career, Michael Claassens rode to Bath Rugby’s rescue today and restored a sense of stability.
A lot of things feel like they are up in the air at The Rec at the moment.
Club skipper Luke Watson has announced he is heading back to South Africa at the end of the season, while World Cup-winner Butch James has also indicated he’d be keen to pack his bags swiftly enough should Bath release him from his contract. Couple that with the speculation that’s been doing the rounds about a new coaching team being lined up by owner Bruce Craig, and the storm clouds of uncertainty were beginning to look ominously heavy.
This morning, Claassens’ peroxide blond locks pierced those clouds when the club announced the scrum-half had signed a new two-year deal.
After four years at The Rec, Claassens could have left Bath at the end of this season owing the club and its supporters precisely nothing.
It was a bold enough move for the Kroonstad-born former Springbok to bring his non-English speaking wife over here four years ago. By upping sticks and leaving South Africa, the eight-cap international was effectively turning his back on further appearances in the gold and green, and taking a step into the unknown.
What Claassens has delivered for Bath since then is season after season of graft, spark and honesty.
A year-and-half ago, this softly spoken gent was handed a poisoned chalice when he was asked to captain the club following the summer’s drugs scandal.
In those circumstances, the captaincy was always going to be a thankless task - but Claassens stepped up and bore it all with an unceasing attitude of composure, politeness and unblinking stoicism. And by the end of the campaign, after a torrid beginning, Bath were playing the most attractive rugby of the Premiership.
With his best mate and half-back partner Butch James more than likely to be heading home at the end of the season, it would have been the easy option for Claassens to follow him back to South Africa,
That he isn’t, but is once again sticking by Bath during a tough period, should be a source of gratitude for every Bath supporter. If you’ve any festive port left over, then you should be preparing a toast.
Posted by Tom Bradshaw at 12:32 No comments: