Its nickname may be Castle Grim but the atmosphere at Kingsholm on Saturday was anything but.

You have to hand it to the Gloucester fans – they certainly know how to create a buzz fit for a derby.

Whether you're a home fan, a visiting supporter or a neutral, you know that five minutes before kick-off – with The Shed warming to its task – you'll be getting a fizz of expectation surging through your central nervous system. Or something like that, anyway.

On Saturday, however, the Gloucester crowd proved there is more to it than the ability to sing very loudly and get under the skin of the opposition. For just a minute or two, Kingsholm discovered its sensitive side, maybe even its soul.
Click here for more

When Olly Barkley was carried off the pitch on a stretcher in the 67th minute, his leg in a splint and a laughing-gas mask over his mouth, it was a pitiful sight.

Of course, you would expect any crowd with a crumb of humanity to offer polite, sympathetic applause in such a case. But a few hardened Cherry and White supporters went further, rising from their seats to applaud the man who has something of a history at Kingsholm.

Some were a little self-conscious as they got to their feet but there was a touching sense of the West Country divide being temporarily healed.

Barkley didn't much take to Gloucester during his year at Kingsholm in 2008-09, nor did Gloucester take that warmly to him.

But I think The Shed holds some respect for Barkley over the honest way he extricated himself from his two-year Gloucester deal, rather than sitting out a second year in a stew of discontent.

There was plenty of baiting on and off the pitch on Saturday and no shortage of handbags being swung but the moment of unity brought about by Barkley's injury was a moment to remember.

That, even more than a seven-try, 56-point match, was proof that the spirit of rugby is very much alive in the West Country.

For Barkley to suffer another leg break just a year-and-a-half after his first fracture is a cruel blow indeed. But he's showing every sign of adopting the kind of attitude needed to weather such a set-back.

Once Barkley finally received his morphine at hospital, he was quickly making wry observations about life in hospital via his Twitter web page.

That sense of humour will stand him in good stead during the long road of recovery. Good luck, Olly.
Posted by Tom Bradshaw at 10:14 No comments: 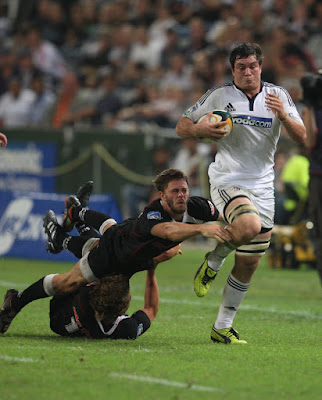 I don't know if you saw any Super 15 rugby at the weekend. Luckily, I did. It was a treat.

On a bad day, the southern hemisphere competition can appear like a contest of headless chickens. On a good day, the skills on show leave you wishing you lived on the other side of the world.

Tha handling skills, in particular, are something else. The number of implausible off-loads, deft basketball-style lobs and dexterous inside pops over the weekend was a marvel.

The firm pitches help, of course – there are no mud baths for these chaps to contend with.

If ever there was an advert for summer rugby, this is it.
Posted by Tom Bradshaw at 10:07 No comments:

Life's a Beech at Bath

Loosehead prop Charlie Beech will be moving from London Wasps to Bath Rugby this summer. He is Sir Ian McGeechan's son-in-law and McGeechan is, of course, Bath's director of rugby.
But it looks like he'll be getting a far from comfortable ride.
Posted by Tom Bradshaw at 10:00 No comments:

Marksman Olly Barkley could give Gloucester the bullet 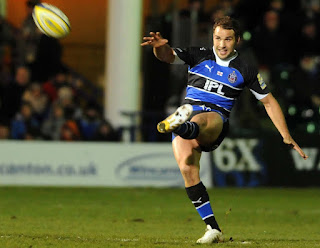 Olly Barkley is in outrageously good form with the boot at the moment, with 15 successful strikes on the bounce. Those efforts haven't gone unnoticed by that big beast of the Bath pack, Danny Grewcock.
If things come down to a kicking duel on Saturday when Bath travel to Gloucester, then the visitors could have the edge; Gloucester fly-half Nicky Robinson has a success rate that's 20 per cent lower than Barkley's.
Read my column in this week's Bath Chronicle here.
Posted by Tom Bradshaw at 16:42 No comments:

"Butch should start at 10 for Boks" says Watson 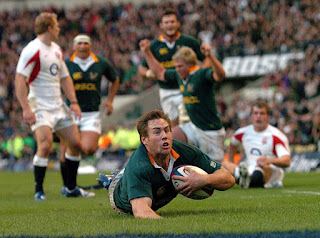 Here's a bit I did for SARugby.com - Butch James is backed to be Springboks' starting fly-half for the World Cup by club-mate Luke Watson
Posted by Tom Bradshaw at 11:26 No comments: