For any gamers out there, here's a sneak preview of the official game for the Rugby World Cup. Doesn't look bad, does it? I might have to boot up my games console for the first time since Sonic the Hedgehog.
Posted by Tom Bradshaw at 08:22 1 comment: 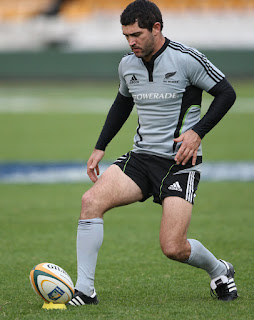 Bath Rugby have until August 12 to appeal against the RFU's decision to deny All Black Stephen Donald, pictured, the right to play in England.

Reports over the past week have suggested that it was the Home Office's UK Border Agency which turned down Bath's bid to bring the New Zealand star to The Rec next season.

But I have received confirmation that it was the RFU that made the decision on Friday.

It has also emerged that the rules that led to the RFU verdict were only implemented after Bath had begun discussions with Donald, who has 21 caps for his country.

The regulations came into effect on May 16 when they were signed off by the UKBA. They had been drafted by the RFU Governance Standing Committee, which has representatives from Premiership clubs.

An RFU spokesperson said today: "Stephen Donald failed to meet the RFU Governing Body Endorsement criteria to play rugby in England, in accordance with UKBA requirements, because he has not started a game for New Zealand within the past 15 months.

"Bath Rugby are entitled to appeal."

I understands that Donald is still keen on a move to the West Country, despite reports linking him to the Auckland Blues, and that Bath will appeal.

Any appeal is likely to focus on Donald's injury record, as well as his high profile.

The outside half required chest surgery in June 2010. If Bath can persuade the independent appeal panel that such an injury prevented him from playing his way into contention for a starting berth for the All Blacks, then the appeal – according to RFU regulations – would succeed. Donald also suffered broken vertebrae in March this year.

An appeal panel would also need to consider "whether the player is able to contribute significantly to the development of the game at the top level in England".

Given that Donald has been understudy to the best fly-half in the world, Dan Carter, for the past few years, Bath could well argue that he is of sufficient quality to "contribute significantly" to the profile and spectacle of the English game.

The Home Office suggested to me this week that the RFU decision had been made to protect the UK labour market.

A UK Border Agency spokesman said: "The responsibility rests with sports governing bodies such as the Rugby Football Union to endorse sponsorship applications from clubs and the application of each sportsperson wishing to enter the UK.

"This is because they are best placed to determine the skill level of a migrant and whether there will be an adverse impact on the resident labour market of their sport."

I understand that Donald had agreed terms and signed a contract with Bath following the expiration of his deal with Hamilton-based Super 15 side the Chiefs. He has been lined up as a replacement for Springbok Butch James.

It is also understood that the senior management at Bath, who have not commented on any reports linking Donald to the club, had been aware that he needed both RFU endorsement and then migration clearance from the UKBA. The RFU endorsement rules require foreign players to be recent, full internationals.

Donald has made three appearances for the All Blacks in the past 15 months, but all from off the bench. Last month - after he had been linked to Bath - he was dropped from the New Zealand squad ahead of the World Cup

Sophie Barrett-Brown, a leading immigration expert with international sports law specialists Laura Devine, said Bath had no option but to request an appeal if the club wanted to persist in its bid for Donald.

If the appeal fails, then it could demand a judicial review but that could have huge financial ramifications.

"There has to be the governing body's endorsement, there is no way around that," said Barrett-Brown.

"Judicial review is the only potential way around it but that is costly and risky. If you are unsuccessful the costs of the other party can be awarded against you."

Should Bath call for a review, then the panel would comprise an independent chairman, an RFU representative and a Premiership Rugby representative.
Posted by Tom Bradshaw at 17:10 No comments:

The Southern Hemisphere loose forwards with their eyes on Bath 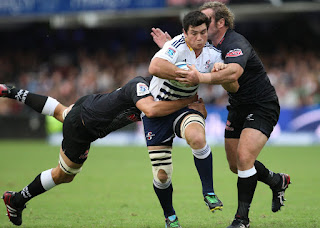 Bath Rugby saw off a bid from arch rivals Leicester Tigers to secure the services of Springbok flanker Francois Louw, I can reveal.

But the South African flanker, pictured, says a "captivating" visit to Bath early this year made the choice between The Rec and Welford Road a straightforward one.

I exclusively revealed in January that Bath were interested in seven-cap Louw and we reported in April that a deal had been signed.

This week, following the conclusion of the Super 15 competition in the southern hemisphere, both Bath and Louw's hometown side, Cape Town-based Stormers/Western Province, confirmed the 6ft 4in blindside specialist would be moving to The Rec.

I can also reveal that another southern hemisphere loose forward, Julian Salvi, approached Bath with a view to returning to the West Country next season.

Brumbies openside Salvi enjoyed a spectacularly successful year at Bath in 2009-10 when he was named the club's best forward, and recently asked his agent to contact the Bath management to discuss the possibility of another spell at The Rec.

"Julian instructed me to get in touch with Bath first but unfortunately Bath were full," said Salvi's agent.

This week, it was announced Salvi would instead join Leicester on a two-year deal.

One man who is delighted to be heading to The Rec rather than Welford Road, however, is Louw.

"Playing overseas is always something I've wanted to do and Bath were the first club to approach me," he explained.

"When Bath flew me over for a visit, I was blown away by the ethos among the team and the whole set-up. It was all first class. And it was all in such a beautiful city. I was instantly captivated. What's not to like?

"It was a tough decision to leave Western Province, but easy in the sense that Bath had created such a great impression.

"There were a couple of other interested clubs. Leicester were top of the Premiership and that created a pull, but Bath was always the club for me.

"It's important to be at a club that's going forward, and I could see that was the case at Bath straight away."

The 26-year-old, who has penned a three-year deal with the club, says he is in for the long haul.

"When I sat down with Bath, I explained that I was fully committed and not just doing a little stint overseas," he said.

"I want to shape myself into a team and be part of a growing team going forward."

Louw, however, won't give up on his international ambitions while at Bath. He has been named in South Africa's provisional World Cup squad and is likely to join the club following the conclusion of the competition.

"If the opportunity comes up to play for my country [while I am at Bath] then I would play in a heartbeat," he said.

"Bath know about my commitment to South Africa and my willingness to represent them."
Posted by Tom Bradshaw at 08:12 No comments: