One rule for the pros, another for the amateurs - why rugby has a fight on its hands

You don’t have to be Hercule Poirot to conclude that there appears to be one law for professional rugby and another for the amateur game when it comes to the punishments handed down for on-pitch violence.
The jailing of Keynsham number eight Jack Weston for six months is a case that brings into sharp relief what, to my mind, is a disgusting disparity between the professional and amateur games in this country.
Weston was put behind bars for throwing two punches at an opponent during a ‘hotly contested’ derby with Oldfield Old Boys. 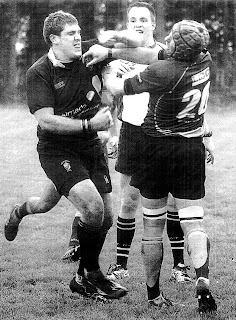 The moment that cost Jack Weston, left, his freedom

Back in May, a rather better known player by the name of Manu Tuilagi threw three punches at an opponent in another hotly contested derby, this time in the East Midlands, between Leicester and Northampton.
Weston is now sitting in a prison cell. Tuilagi? Well, less than a month after letting rip with his barrage of punches in front of the TV cameras, he was named the Premiership’s Young Player of the Season. He then went on to play for England in the World Cup.
The only slap on the wrist for Tuilagi was a nominal five-week ban – I say nominal because the regular league season was over.
He was also ordered to pay £500 in costs – pretty small change for an international star.
In evidence given against Weston – who pleaded guilty to GBH – his victim, Oldfield’s Ben Staunton, said the impact of the second punch he had received had been “ten out of ten”.
Those who have seen footage of Tuilagi’s final effort on Chris Ashton could quite reasonably give it the same rating.


Ashton needed treatment to his cut and bruised face; Staunton’s jaw was broken.
The RFU’s disciplinary officer, Judge Jeff Blackett, so often a voice of reason, made the following observation after the hearing into Tuilagi’s behaviour. It was an observation that raised eyebrows at the time but, in the context of Weston’s case, it raises as many questions as it does eyebrows.
“This sort of incident is very damaging to the image of the game and there is no place for this type of offending on the rugby pitch,” wrote Blackett.
“Had it occurred in the high street an offender would have been prosecuted in the criminal courts. Nevertheless we are confident that Manu Tuilagi will learn a valuable lesson from this.”
Had it occurred in the high street.... Is the inference from this that professional players enjoy immunity from prosecution for their on-field violence? Because if that is the case, then it is certainly not the case for the amateur game, as Weston’s case has shown.
Jack Weston’s unacceptable behaviour did not occur on the high street, it occurred on the rugby pitch – and he had the book thrown at him.
Manu Tuilagi’s unacceptable behaviour also occurred on the rugby pitch – in front of a massive TV audience – and the CPS sat on its hands.
Almost laughably in the context of Blackett’s remarks, the judge in Weston’s case, Judge Carol Hagen, jailed him because of the bad example he had set.
“It is important everyone realises the consequences of the behaviour you engaged in on that November afternoon,” she told him before sending him down.
If lessons about consequences are to be learned, then Judge Hagen’s logic would lead us to the conclusion that Tuilagi should have been jailed too. After all, he was playing in a match watched by hundreds of thousands, if not millions, of people on television. He is the one idolised by kids.
I don’t condone Jack Weston’s actions, not one bit – thuggery in all its guises does not belong in the game – but the inconsistency across the different levels of the game stinks.
Once he is out of prison, Weston will face a Somerset RFU disciplinary hearing. That, surely, will be an ideal occasion for everyone in rugby to think long and hard about this frankly appalling disparity.

Lewis Moody talks to me about his career, retirement and that creaking trophy cabinet

In his autobiography published after last year’s World Cup, Lewis Moody paid tribute to the cast of medics who had patched him up during his 16-year career.
And one day, the tale of his injuries, operations and comebacks will doubtless form a textbook for first-year medical students. 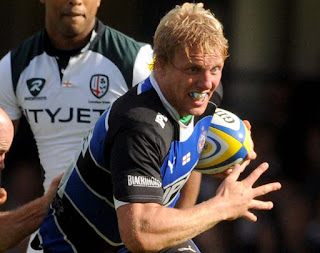 Ultimately, though, the years of attrition took their toll, resulting in his enforced retirement this week.

But, typically, Moody (pictured) was still smiling and looking to the future when I caught up with him on Tuesday. It was such a demeanour that saw him through many long injury lay-offs, injuries caused more often that not by the way he put himself about on the pitch.

Full-on, devil-may-care, kamikaze, scant regard for his own safety, body on the line... There are many ways in which Lewis Moody’s style of play have been described. Suffice it to say that the first person who nicknamed him Mad Dog wasn’t barking up the wrong tree.

Like a veteran of many a campaign in far-flung war zones, it takes more than one breath to get through Moody’s roll of honours.

The most capped England flanker, 71 caps for his country, seven Premiership titles, three for the British and Irish Lions, two Heineken Cup winner’s medals, one Anglo-Welsh Cup winner’s medal, two Six Nations Championship winner’s medals and one World Cup winners medal. It is some haul, and one that enables Moody to be at peace with his decision to hang up his boots.

“There’s no self-pity at all,” he says of the shoulder injury that has caused his retirement. “That’s not my style.

“I’ve had a phenomenal career - far greater than anyone could have imagined, certainly me. Some players don’t win a single trophy in their career, I think I’ve won 14 or something ridiculous.”

Many of Moody’s achievements were accomplished despite him being diagnosed with colitis in 2004-05. Over-exposure to anti-inflammatories, antibiotics and painkillers contributed to the onset of the condition, and a few seasons ago Moody even stopped taking protein shakes - ubiquitous in every professional club - to help his intestinal problems.

Moody made his international debut in 2001 and went on to feature in all seven of England’s games in their triumphant 2003 World Cup campaign.

He represented the Lions in 2005, helped England reach the 2007 World Cup and then captained his country into last year’s tournament.

Ultimately it proved a disappointing experience as England bowed out in the quarter-finals after a campaign dogged by controversy. Moody blamed himself for some of it.

He announced his retirement from the international game after the World Cup and was looking forward to channelling all his energies into Bath Rugby. Then, in his first Premiership game after returning from New Zealand, Moody took to the field at Sixways in what was to be his last game. A shoulder injury ended his game early, and it was to prove to be the final curtain on his career.

“It was gutting because when I retired from international rugby, all I wanted to do was focus my time on playing for Bath and playing out the two years left on my contract and then maybe having another year with the club,” explains Moody.

“I came back to training and was getting through everything great and then I suddenly couldn’t get through anything.

“You realise in your own head that something’s fundamentally not right and I realised that the injury I’d picked up against Worcester wasn’t something I was going to be able to come back from.

“It was an easy decision in that the body just wouldn’t recover.

“Of course I took professional advice. I wasn’t prepared to give up on my career until I’d explored every avenue.”

On Sunday, Moody decided he had played his final game.

“Over the weekend I had to bite the bullet and be realistic. I had to admit that I’d tried to come back but that unfortunately it wasn’t going to happen.”

And what of the future?

“There are many avenues for me to look at. Coaching is one of them, media stuff, team-building, after-dinner speaking and getting involved with the charities and sponsors that you can never give enough time to when you are playing due to training and games.

“There are so many options open to you it’s almost daunting thinking that you’ve got to go down one of them.