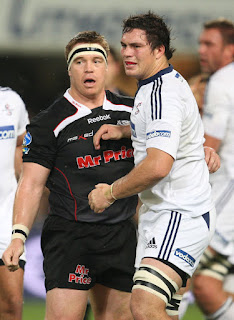 My ventures into the blogosphere have been curtailed of late due to a book deadline and an outbreak of technical incompetence. But in case you missed it, I had an exclusive on Springbok Francois Louw moving to Bath Rugby from Super 15 high-fliers the Stormers, see
The Bath Chronicle and SArugby.com.
This has been in the offing for some time too, see my earlier postings
Picture: Steve Haag, Backpage Sport
Posted by Tom Bradshaw at 16:40 No comments:

Steve Meehan's exit - was it inevitable once McGeechan arrived?

It may not have been a collision course but it was always going to be a path fraught with obstacles.

When Bath brought in Sir Ian McGeechan over the summer, the issue of how the coaching legend would work alongside Steve Meehan was on every supporter's lips. Would it be a dream team, or would it be a recipe for friction?

But muddling through and rubbing along just aren't good enough for a team with such high ambition.

Head coach Meehan ruled the roost at Bath for four seasons before McGeechan arrived. Taking more of a back seat – or at least losing the right to have the final say – was never going to be easy to stomach and a man of McGeechan's experience and pedigree was only ever going to want to call the shots.

Ever since then – slowly but surely – McGeechan has assumed an increasingly tight grip on playing matters at the club.

Less than ten weeks into the season, McGeechan's title was changed from performance director to director of rugby and, for the first time, chief executive Nick Blofeld spelt out the chain of command – Meehan reported to McGeechan.

That clarification was needed because players, including skipper Luke Watson, had alluded to an underlying uncertainty over exactly what McGeechan's role was and how it fitted alongside Meehan's.

Unfortunately, that change of title did not end the uncertainty.

Privately, the odd player has admitted that there have been too many voices at training. One coach in one ear, another coach in the other.

By the turn of the year, McGeechan was taking a lead in many training sessions, cultivating a greater emphasis on forward-based play.

The game was up a week last Monday when Meehan did not attend a training session. Instead, he was in the meeting with Blofeld that would result in their decision to go their separate ways.

The head coach has been gradually eclipsed by McGeechan as the season has worn on. That is a rather sad way for the Australian's fifth year at the club to peter out – but what an eventful previous four years he had at Bath.

Meehan assumed the hot seat when the club was in a state of flux. The 'ten-man rugby' of the John Connolly era had left Bath a tedious spectacle and Brian Ashton was poached by England before he had time to get his feet under the table.

As a relative unknown, Meehan arrived at The Rec fresh from a successful spell at Stade Francais, where he had worked as assistant coach to first Nick Mallett and then Fabien Galthie.

And he sought to inject a spot of Gallic flair into Bath's plodding play. Under his tutelage, two of the club's – and the Premiership's – most devastating young ball-carriers, Matt Banahan and Nick Abendanon, quickly came to the fore.

Meehan put his side on an upward curve, taking them to the final of the European Challenge Cup in his first season and winning it the next.

Meehan's side went close to pulling off a major Heineken Cup upset in 2009 when they came within a whisker of beating Leicester in an away quarter-final. Three successive league play-off spots in 2008, 2009 and 2010 also cemented Bath's reputation as consistent title contenders – but they never quite managed to make the next step from contenders to finalists.

After Blofeld was appointed as Bath's new CEO two years ago, he was quick to praise Meehan's attacking guile.

"The biggest compliment I can pay Steve is to express my admiration at Bath's ability to unlock defences," Blofeld told me.

"It's incomparable – and that's the most important part of rugby."

But for all the importance of slicing defences open, there remained a lingering sense that Bath lacked the winner's mentality of a Leicester. They were the Premiership's pretty boys but needed to know when to play ugly.

To his credit, Meehan solidered on through some very dark days indeed, operating under high levels of stress. The opening months of last season must have left him pining for his native Gold Coast.

In the aftermath of a season that saw Bath lose five senior players to drug allegations, the squad was riven by discord. Bath struggled to find their feet but, when they finally did, they set off at 100mph.

There may have been a few whispers about Meehan's man-management techniques but the way the 2009-10 season was transformed was a remarkable and defining moment of his tenure.

Smart and wry, Meehan is the longest-serving head coach in the Premiership and with five years at the helm (or four, if you exclude this one) he's arguably had a fair crack of the whip.

But it has not been a happy finale for Meehan, who has seen his power at the club gradually ebb away over the season.

Even so, the club is doing the right and proper thing in keeping him on until the end of the season. Such a servant deserves the dignity of an orderly departure.
Posted by Tom Bradshaw at 16:15 No comments: