Bath in a stew over Irish slip-up 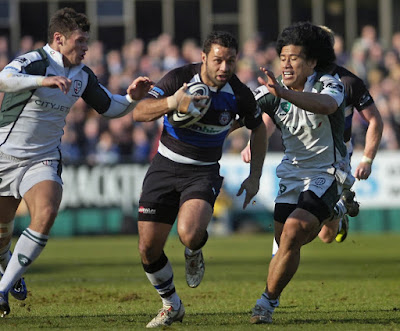 It was with an unpleasant blend of anguish and disbelief that The Rec faithful watched Bath Rugby put in the kind of woeful second half performance upon which season's founder.
To see London Irish slice through the home side with the ease of the proverbial hot knife through butter was deeply dispiriting for those who, up until 3pm on Saturday, had believed that this was to be Bath's season.
Now they're probably revising such a view.
Championship-winning sides do not surrender 17-0 half-time leads in the slothful, distracted manner in which Bath played the second 40-minute period. Some of the missed tackles were appalling, and enough to have had head coach Steve Meehan and defence coach Brad Davis seething with frustration.
But from such negatives, positives can come. The players need to hold this second half performance before their minds - and use it as a spur to ensure it never happens again.
Posted by Tom Bradshaw at 09:44 No comments:

There's a lot of talk from within the Bath camp at the moment about the side gearing up to enter the business end of the season.
But come the season's end, is Bath Rugby going to be a viable business?
The B-word can be a dirty word for union purists but in this professional era of bottom lines, stadium capacity demands and salary caps, Bath Rugby – like the rest of the country's top-flight teams – is a business as much as it is a rugby club, and the power of sterling cannot be ignored.
Now, just for a second, imagine the following.
It's late February. Bath are third from bottom in the Guinness Premiership and their Heineken Cup ambitions are dead. They look destined for mid-to-bottom-of-the-table mediocrity.
Away from the pitch, it is not clear where they are going to be playing their home games next season. It is not even clear whether, if they manage to stay at The Rec, they will have permission for the current stands to stay in place. The authorities that have ultimate jurisdiction over what happens at the site are giving off negative vibes over the club's long, medium and even short-term there.
Would the word crisis be used in such circumstances?
Of course it would. Imminent homelessness or the prospect of a sharp reduction in the club's crowd capacity at its ramshackle current home is an intolerable position for a top-flight club to be in.
The fact of the matter is that Bath's on-pitch success this season is, to a large degree, glossing over the growing crisis off it.
But because all is well in the Premiership and because the European campaign remains on track, the crisis away from the pitch loses its immediacy and urgency.
If Bath were having a dud season, then I'd wager that the homelessness issue would appear far more pressing and the debate about the club's future would be more vociferous, possibly even plain nasty.
That is not to say, of course, that the issue of Bath's future at The Rec isn't being keenly commented on and discussed. Members of the Real Friends of The Rec and contributors to supporters' website bathrugbyere are among those at the heart of this debate, and this paper carries almost weekly updates on the convoluted discussions between the Recreation Ground Trustees, the Charity Commission and the club itself.
But on the whole, these discussions are being conducted in, on the face of it at least, a restrained, gentlemanly way. The parties involved may have frustrations and reservations about the way other parties are going about the issue but these criticisms are being couched in soft, diplomatic terms.
Sooner or later, however, and I hope it is sooner, there are going to be ructions. And why do I want ructions? Because this whole debate needs to be brought to a head – quickly. Firm deadlines need to be imposed so the club and supporters alike can escape this purgatory and know exactly where they stand.
Bath Rugby cannot draw up a meaningful business plan in this current state of limbo. And if it isn't able to draw up a plan, then its future is uncertain.
Silverware may well be on its way to Bath this year but whether or not the trophy cabinet that houses it will be in Bath, Swindon, Corsham or Timbuktoo is still, sadly, anyone's guess.

For more of Tom's thoughts on Bath Rugby and the state of English union, click here
Posted by Tom Bradshaw at 09:31 No comments: 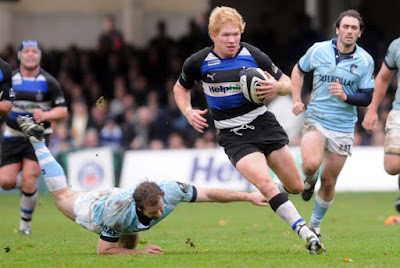 Falling back on a tried and tested formula is an instinct in us all.
We had a good holiday in France last year – let’s book it again. They have nice ale at The Anchor – let’s go for a pint there again. Mike Tindall’s played well for us in the centre before – let’s pick him again.
But fortune can favour those willing to depart from the frequently trodden path. For those plucky enough to take a bold decision that takes you into unknown territory, the rewards can be great.
And that applies on the rugby pitch just as much as it does off it.
That Mike Tindall is a superb centre of world renown is not open to question. But recalling him when things aren’t clicking in the England centres is not the sort of creative, progressive move that Martin Johnson should be making as he seeks to build a national team for the future.
Tindall is a known quantity. His bag of tricks contains no surprises. All the opposition teams and coaches will have video analysed him until the VCR conks out. He is unlikely to be the man who will rouse the England backline to new creative heights.
But what of the other centres that Johnson has at his disposal?
When Tindall tweaked his back during a weights session last week, it was Newcastle Falcon Jamie Noon that Johnson fell back on.
But for all his muscle and reliability in defence, Noon – like Tindall – lacks the attacking guile and flair that is so desperately needed to inject sparkle into a backline that is too often bereft of imagination, creativity and the ability to spring a surprise.
Both Noon and Tindall can be crash ball carriers. But trying to gain the hard yards by thundering up the middle and hoping to break the tackle with a Maori sidestep ain’t going to work against a midfield that’s as resolute and watchful as, say, Wales’.
No. England need in the number 13 shirt someone who is both inventive and reliable; both smart and solid; both capable of conjuring up a spot of magic and able to hold the defensive line steady.
Step forward Alex Crockett.
That Crockett hasn’t been picked for at least the Saxons this season is a selection outrage.
It’s been said by some – including Bath supporters – that Crockett is a "good club player"; the kind of guy who provides the solid spine around which a strong Premiership side can be built, but not of international calibre.
Tosh. The Bath co-captain is far, far more than that.
Perhaps a year or so ago you wouldn’t have been able to use the words ‘magic’ and ‘Alex Crockett’ in the same sentence very often. He may have been dependable, but did he really have the brilliance to be elevated into contention for an international place?
Now I think the answer is a definite yes. Think of that deft kick into Matt Banahan’s path for the winning try against Sale – a kick that Bath head coach Steve Meehan described as showing the sort of touch you normally find at Augusta in the US Masters. Think of the vision and composure that enabled him to lob that pass to Butch James for the fly-half’s last-gasp winner against Leicester at The Rec.
Both those tricks showed Crockett to be a match-winner, as well as a safe pair of hands.
Martin Johnson should give Crockett the chance on the international stage that this talented player so craves and deserves.
Posted by Tom Bradshaw at 08:59 No comments: