Danny Cipriani - A Rebel who's found his cause? 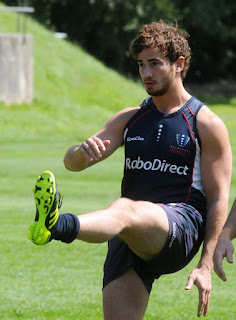 Danny Cipriani tells me why he believes English players should be encouraged to play in the southern hemipshere if they have international ambitions, not prohibited from doing so


Danny Cipriani won't be leaving the Melbourne Rebels anytime soon – and hopes to extend his stay in the southern hemisphere until at least 2013.

The gifted fly-half was linked to a possible move to Bath Rugby in May, when the English club's management revealed they had received an approach from Cipriani's representatives about a return to England.

But Cipriani, who had a chequered debut season with the Rebels, insists it was always his plan to remain in Australia.

The 23-year-old will run out at The Rec tomorrow night when the Super 15 side take on Bath in what will be the first of three pre-season friendlies for the English side.

And Cipriani, who has seven international caps to his name, says he isn't heaping pressure on himself as he prepares to play in front of an English crowd for the first time in a year-and-a-half.

"I can't live my life always feeling that I've got a point to prove," he told the Chronicle.

"At the minute, I'm very secure and happy in the place where I am.

"I've got some good memories of playing games in Bath. The Rec used to be quite a good stomping ground for Wasps when I was with them.

"But this is a new chapter of my life now and I'm thoroughly enjoying being with the Melbourne Rebels."

Cipriani dismissed out of hand the speculation that he had been interested in a move to Bath.

"It was always my intention to do my second year in Melbourne and there was never any doubt," he explained.

"That was just a media spin you guys like to put on things. The second year was always going to be the situation."

The mercurial outside half went further, indicating that he could well seek a third season in Australia.

"Next year, if the Rebels don't want to kick me out, then hopefully I'll stay for another year. We'll see what happens," said Cipriani.

"I'll take each moment as it comes and move forward. At the moment I'm enjoying Super 15 and loving the league."

Following next month's World Cup, England head coach Martin Johnson has said he will only select overseas- based players in "exceptional circumstances".

But Cipriani, who admits to already having one eye on the 2015 World Cup, believes he could yet force his way into England contention while playing in Australia.

Moreover, he reckons that playing against the Super 15s superstars every week is an ideal preparation for international rugby.

"England's selection rules may change," he said. "I may be able to stay out there and get the opportunity to play for England.

"I was speaking to the England management earlier in the season, and for me the Super 15 is the best league in the world.

"Before, when I used to play the All Blacks, South Africa and Australia, because you don't play against them week in week out, it was like 'Jeez, it's Schalk Burger, Dan Carter, Matt Giteau'.

"But if you are in the Super 15 and you're playing against them every week, some of them become friends and it becomes a regular thing.

"There isn't the same [daunting] effect when you play them, so I think it's been a good experience."

Cipriani had a rocky ride during his first year in Australia, with off-field disciplinary issues prompting the Rebels management to leave him behind during the South Africa leg of the competition.

But he believes he has learnt his lesson and emerged a maturer individual.

"I had a few mishaps early on," he admitted. "But for me, last year was a big turnaround.

"For the last part of the season I had to change a few things and focus, and I've done that, so hopefully I will reap the benefits next season."

Posted by Tom Bradshaw at 15:55 No comments: