Why Bath Rugby has to stay at The Rec 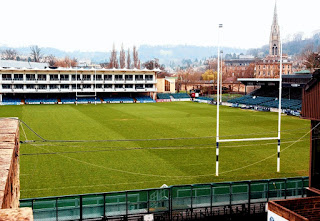 Here are a few of my thoughts on just why Bath Rugby simply must be given the green light to expand on The Rec. A Keep Rugby at The Rec supplement will appear in The Bath Chronicle on May 7.

Fans mingle by the weir, The Boater pub is a sea of blue. black and white, and laughter drifts up from besides the Riverside Cafe.
It must be match day at The Rec. And what a special place at which to hold a game of rugby.
Two of the Premierships most snazzy new-build grounds are Worcester and Northampton. But as magnificent as these two teams’ facilities are, they are out-of-town affairs, dumped by the best arterial road and removed from the towns they represent.
Stroll into Bath on a match day, however, and the atmosphere is so intense you can almost touch it.
Opposition fans pop in and out of the city centre shops, while Bath Rugby flags are draped from a host of pubs.
And where else in the world can you watch a game of rugby with an abbey looking down on you and an elegant Georgian portico just a stone’s throw away over the river?
From the top of the Kronenbourg Stand, where the press box is, the setting gets even better. The southern slopes of the city give the location a rural feel, and Sham Castle reminds you that you are in a place that’s both rich in history and a little quirky.
Yet this unique aspect of Bath life - enjoyed by so many generations for so many decades - could be taken away if Bath Rugby are refused permission to develop The Rec.
This is not something that the Bath faithful want to contemplate. Yet the fans are all too aware that, if the club is to flourish, then financial imperatives - and Premiership regulations - dictate that Bath Rugby needs a greater capacity than the current 10,600.
And should the Charity Commission refuse to budge, then the only way of boosting the club’s capacity may be to move.
Twenty-six-year-old fan Joe Master embodies this attitude, torn as he is between wanting Bath Rugby to remain at The Rec and wanting his club to prosper.
“Of course it would be nice for the club to stay at The Recreation Ground,” says Joe, 20 minutes before Bath begin their final game of the regular season against Saracens. “The ideal scenario would be to develop this place.
“On a day like this it’s glorious - and on match days the club brings a lot of business into the city.
“But we need a bigger stadium. From a financial point of view we need more people coming through the gates.
“The most important thing is that Bath Rugby remains in the city. I wouldn’t want to see the club move to Swindon or somewhere like that. No way.”
After the game, I catch up with my mate Graham - a Gloucester fan.
He’s had a fair amount of misery to endure over the past couple of weeks thanks to an abysmal run of results, but at least - he says - his side has a ground it knows it’s staying at.
“I’d love to see Bath forced out to Swindon,” he says, his malice presumably fuelled by another loss for the cherry-and-whites. “Us Gloucester fans would love to see that.”
Surely, on top of everything else, the city of Bath can’t allow Gloucester supporters to be given that kind of satisfaction?
Posted by Tom Bradshaw at 12:39 No comments:

Shontayne Hape has been impressive for Bath Rugby recently. Click the play button on the video clip below to see what the rugby league convert had to say to me yesterday ahead of Bath's final game of the regular season against Saracens on Saturday.

Posted by Tom Bradshaw at 11:04 No comments:

When technology lets you down - many miles from home

Being 'multi-media' is an absolute must for journalists these days. The days of calling yourself a 'print journalist' or a 'broadcast journalist' or an 'online journalist' are gone. Or at least they should be for anyone who hopes to stay in this business.
Despite my background being in newspapers, I'm pretty comfortable with all this online stuff and think I look okay in front of a camera (although my wife disagrees!)
Having begun my career as a news reporter, my shorthand is fairly reliable. But when covering rugby press conferences and doing face-to-face interviews with players, I find it easier to develop a relationship with whoever I'm interviewing if I use a digital dictaphone. That way you can retain eye contact and it all seems more relaxed.
So my trusty dictaphone was among the kit I took with me when I made the long journey up to Newcastle to cover Bath's game against the Falcons on Sunday.
But when it came to playing back my post-match interview with Michael Claassens, what do you think happened?
White noise, that's what happened. The batteries had run down - although the indicator on the screen of my dictaphone hadn't suggested there was a problem.
It would have been bad enough if it was a home game. But to have travelled all the way up to the North East...
Sorry Michael and sorry readers. But I've learnt my lesson. Rest assured, from now on those batteries will be replaced with clockwork regularity.
Posted by Tom Bradshaw at 14:18 No comments:

Billy Whizz dashes in for some greasy grub 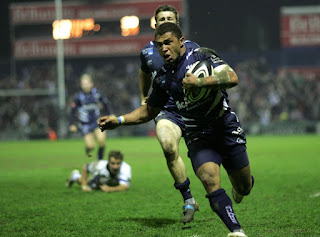 "Sorry, fellas, do you mind if I take a few pasties?"

So spoke a suited and booted Jason Robinson as he peered round the door to the pokey press room at Edgeley Park on Friday night, an hour-and-a-half before the Sharks kicked-off against Bath Rugby.

"I'd love to stay and talk to you guys," he said to me and another surprised early arrival, "but I need to keep the management happy."

And off scampered the World Cup winner, clutching four of south Manchester's finest meat and potatoes with not a paper napkin in sight.

Billy Whizz OBE is back. And I think the Guinness Premiership is going to be a better place because of it.

Read the rest of my reflections on Jason's return to the Premiership by reading my column in The Bath Chronicle
Posted by Tom Bradshaw at 09:58 No comments: