Bath locate the keys once more

Back in July, before he had got his feet under his desk at Bath Rugby's offices in Argyle Street, Bath's chief executive-to-be, Nick Blofeld, pictured, explained to me what he liked about head coach Steve Meehan's strategy.

"The biggest compliment I can pay Steve is to express my admiration at Bath's ability to unlock defences," he said. "It's incomparable – and that's the most important part of rugby."

During the opening half of this season, Blofeld must at times have wondered whether the keys which Bath used to open up Premiership sides had been misplaced for good.

With a backline that struggled to get on the front foot it often seemed that breaching the gainline, let alone the tryline, was an unlikely outcome when Bath kept the ball in hand.

There was the odd cause for optimism, of course. Nick Abendanon continued to conjure up the odd break from deep, while Matt Banahan's first-half performance against Stade Francais proved the Bath backs could still penetrate when the game was played at the right tempo.

Overwhelmingly, however, Bath's attacking play up to Christmas was a poor shadow of what it had been a year earlier – more blunt kitchen knife than whetted scythe.

But Blofeld stood full square behind Meehan, extending the Australian's contract and giving him unstinting backing during those dark days of a winless October.

Now there are hints that such unqualified support is yielding an early spring for Bath. With three wins on the bounce in the Premiership and a total of 75 points put over the opposition in the past fortnight, there's a sense that Bath aren't far from knocking the floodgates down.

In recent weeks there has been a pace, a variety and a composure to their play that had previously been absent this season.

Inevitably, many – including team-mates – have credited the return of Butch James as being the key to all this. And it's surely no coincidence that Bath's form has gone up two gears since the South African's return from injury.

James is walking proof that the much overused adjective beloved of sports journalists – 'talismanic' – can have a fit and proper application.

And what's encouraging for Bath is that another man who can lay claim to the T word, Olly Barkley, is on the verge of a return to action, too.

Both James and Barkley are enthusiastic exponents of that expansive style of play that has become Bath's trademark – and from which the side, even in its darkest hour, has never deviated.

So Blofeld's faith in Meehan and Meehan's faith in the brand of running rugby that he has developed during his tenure at the club seems to be reaping dividends.

A couple of wins on the trot doesn't mean that summer has arrived early but over recent months Bath have proved that – like a good marriage – fidelity through the tough times can make the good times even sweeter.

Read more of my opinions here
Posted by Tom Bradshaw at 15:35 No comments:

Just because you're in the England squad... 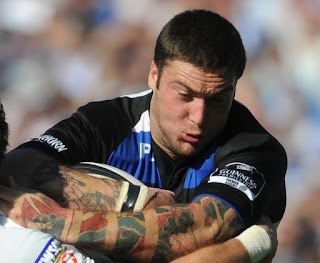 "I'm looking forward to next week's selection meeting," said Bath assistant coach Brad Davis after his side's destruction of Sale Sharks at the weekend. "It should be pretty tasty."

I bet it was delicious. And I bet it was a more cheerful affair than previous selection get-togethers at Bath this season.

Davis was due to sit down with head coach Steve Meehan and forwards coach Martin Haag on Tuesday to decide on the team for Sunday's trip to Reading to take on London Irish.

That meeting is likely to have taken place before Martin Johnson officially announced which of his England squad members would be released to play for their clubs this weekend. But the question many of those who saw Bath on Saturday will be asking is whether the England squad members discharged back to The Rec should get a spot in the starting XV anyway.

Should you make changes to a team that was so dominant just a few days earlier, regardless of how good the returning cavalry is?

Matt Banahan, Shontayne Hape and Lee Mears are all back in Bath now, Johnson having decided they are surplus to requirements for England's trip to the Stadia Flaminio in Rome this weekend.

The issue of Banahan's inclusion in the Bath starting XV on Sunday is a vexed one – a concept that would have seemed unthinkable only a month ago.

If the Jerseyman is included in Meehan's starting XV for the encounter with London Irish, then that will have to be at the expense of the in-form Michael Stephenson or Joe Maddock. The equation is further complicated by the presence of Jack Cuthbert, who didn't do much wrong against Sale.

Maddock's form has not been consistent this season but recent signs have been positive and his sidestep certainly hasn't deserted him. And the man who was the Guinness Premiership's leading try-scorer last season has to get off the mark at some point this term.

And what about Hape? The centre has started every Guinness Premiership and Heineken Cup match for his club so far this season and many might regard his selection at inside centre against the Exiles as a formality.

But before Hape is chosen at 12, Bath need to decide who's taking the place kicks on Sunday.

If, as would seem sensible, Butch James is allowed to concentrate on his play-making rather than worrying about goal-kicking, then Ryan Davis may just slot in at 12 on Sunday, with Hape moving to outside centre. That would be my selection anyway, especially given Davis' excellent showing against Sale and the way he interacted in midfield with James.

It would also prime Hape for the outside centre role, a position he is set to fill on a more permanent basis once Olly Barkley returns.

And Mears? He played well enough in the second half against Sale but for me Pieter Dixon showed sufficient creativity in the loose and solidity at the set piece to retain the hooker jersey.

Such genuine competition for places augurs well for Bath. After all, who, even just a few weeks ago, would have thought there'd be room for debate about whether Bath's England contingent should be selected for their club?
Posted by Tom Bradshaw at 08:02 No comments: 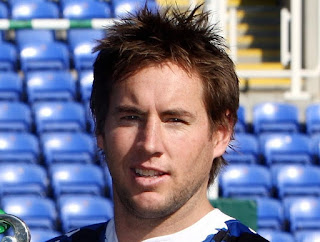 There are various plots and sub-plots running through Bath Rugby's season. Chief among them is a South African narrative, and it has three strands to it.

At various stages this term, each of Bath's South African players has had pressure heaped on his shoulders. And the story of Bath's season will, in no small part, depend on how those players – Michael Claassens, Luke Watson and Butch James – respond to that pressure.

The first part of the narrative is Michael Claassens' captaincy. Claassens has been supping from what has been a toxic chalice ever since he took on the Bath armband in the wake of the summer's drug allegations.

His appointment was something I whole-heartedly supported. Following the party-culture – perceived or otherwise – that had grown up around the club's previous captain, Bath needed a steady, responsible hand on the tiller. A married workhorse like Claassens was just the ticket.

Unfortunately for Claassens and unfortunately for everyone associated with the club, the fallout from the summer cut deeper than anyone could have predicted. In those circumstances, leading a team was always going to be tricky. Even Martin Johnson would face a stiff task.

The denouement to Claassens' captaincy is not yet worked out, largely because it depends on the successes or otherwise of his compatriots.

And that takes us to the second thread. There was no shortage of excitement in the build-up to Luke Watson flying in from Cape Town in November. As the hysteria mounted, head coach Steve Meehan cautioned against fans viewing him as a 'messiah' but the charismatic forward hasn't disappointed.

The plot of Watson's life is itself an intriguing one and it's clear his ambitions for Bath are the very opposite of modest. And there's no doubt his arrival has injected spine and audacity into the Bath pack.

"Pressure is under-rated," Watson declared within minutes of walking on to The Rec. And it is a mentality that he has reflected in his play. Nothing perturbs him.

Is Watson a captain in waiting? The principal arguments in favour of this are that: a) he is a natural leader with a proven record in successfully captaining a team, and b) by arriving after the summer's shenanigans he carries no Bath baggage.

But Claassens as captain with Watson as pack leader may yet turn out to be the best formula for Bath. That's because I'd argue that, in the absence of Butch James playing outside him during such a difficult period, we've yet to see the best of Claassens as a skipper.

And so to our final installment of Bath's South African chronicles, Butch James (pictured).

With the exception of that inspiring first-half performance against Stade Francais at The Rec, moments of attacking guile and brilliance from Bath have been few and far between this season. That dearth of flair has stemmed from neither Nicky Little nor Ryan Davis having shown sufficient consistency or dynamism at fly-half to get the backs firing.

As James has acknowledged, there is pressure on him and he was only half-joking this week when he said that he wished Olly Barkley was returning for the Sale game too, as that would dilute some of the focus on him.

The dream denouement for Bath fans is that James comes back all guns blazing, thereby making his half-back partner relax into his captaincy role. Watson, meanwhile, elevates the Bath pack's belief with a string of uncompromising showings.

Fact or fiction? We'll know in a couple of months.
Posted by Tom Bradshaw at 13:03 No comments: