Are you happy now, Sir?

When a Premiership coach mutters the words “referee” and “criticism” in the same sentence, he is dipping his toes in very dangerous waters indeed.

As Saracens’ Brendan Venter and Sale’s Steve Diamond have learned over the past year, expressing one’s contempt for an official’s performance in a less than subtle way can lead to stiff punishment.

But things cannot be allowed to swing so far that a referee’s performance is beyond criticism and that is why Brad Davis’s remarks, in today’s Chronicle, are welcome.

Read the Bath first-team coach’s comments and you can feel the frustration – but there is sympathy for the referees’ situation, too. Goodness knows that refereeing a rugby match is a tall order. As an enterprise with more regulations than an EU bureaucrats’ banquet, one man cannot make the right call at every single point in an 80-minute game. The poor bloke only has one pair of eyes.

But that does not mean referees exist in an inner sanctum and are untouchable. If coaches believe a referee has mishandled a particular part of a game, and can deliver measured and cogent explanations as to why that is, then they should be free to voice those views at a post-match press conference. And while Davis’ suggestion that referees should make public mea culpas every time they have made a howler might sit uneasily with some, including me, I can sympathise with the general direction – if not the conclusion – of the argument.

A regime that required referees to hold their hands up could, over time, erode trust in those very officials it was designed to support. Rather than earning supporters’ respect, fans could well end up rolling their eyes and saying “He’s got it wrong again”.

There will be those who lament the fact that not all referees now receive the rather Victorian address of ‘sir’, although a number of professionals still use this.

But if there is to be greater trust in the way games are officiated, then I can suggest three measures to at least get the process going.

Firstly, there needs to be uniform coverage of matches by television match officials. You cannot have a situation where one match is covered by a TMO and another – which is of potentially equal significance to the league’s final shape – which does not give the ref the option of ‘going upstairs’.

Secondly, ensure the assistant referees – aka linesmen – do indeed assist the ref. Well- run games are invariably the product of a trio of officials working in harness, with the man in the middle constantly using the extra eyes and ears that are at his disposal.

Finally, the RFU should make public (perhaps on its website) an abbreviated version of the feedback that it gives to clubs about a referee’s performance. This would at least satisfy supporters that gripes are being addressed. It would also keep the game’s regulators and referees on their toes.

That should help keep the supporters onside, shouldn’t it, sir?

Posted by Tom Bradshaw at 17:56 No comments:

He might have accused me of being a car thief when I turned up at a press conference the other day in the editor's Merc, but Matt Banahan is still on track to write an exclusive column for The Bath Chronicle during the 6 Nations. 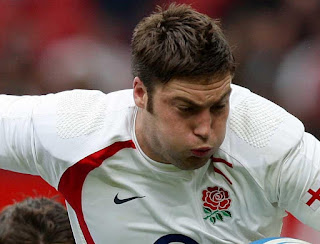 The England back was controversially dropped to the second-string Saxons by Stuart Lancaster earlier this month, but Banners is itching to get back into the senior squad and will be offering his own take on Europe's top rugby competition.
We're just dotting the i's etc but I should have more details soon.

Posted by Tom Bradshaw at 17:07 No comments:

Bath Rugby have one last chance this weekend to ensure their European campaign ends with a bang rather than a kitten-like whimper. But whether or not they manage to beat Glasgow on Saturday, this season's campaign has seen Bath's value among the continent's big boys fall faster than the Euro.

If Bath were a European economy, they would have endured a triple dip recession in recent years. A new Heineken Cup campaign always heralds fresh positivity, but Bath have nosedived in each of the last three seasons.

Bath have won four Heineken Cup matches during those three campaigns, an embarrassing stat for former champs however you dress it up.

Two of those wins were against Italian whipping boys, with the other two coming at home against Edinburgh in 2009-10 and Montpellier this season. Neither of those last two victories was convincing.

Put another way, very few scalps have been claimed by a side with the self-professed goal of rubbing shoulders with the likes of Toulouse, Munster and Leinster.

But Bath are not the only side whose stock has plummeted on the European bourse. Investors in that traditionally defensive stock, Leicester Tigers, also have cause to feel jittery.

Tigers director of rugby Richard Cockerill partly blamed the salary cap for his side's woes after they were on the end of a beating in Ulster last Friday.

In Cockers' book, the cap prevents English sides from having sufficient depth to compete with those French and Irish sides which have greater wherewithal.

There is certainly something that separates Irish clubs and English clubs at the moment. For proof of that, just cast your eye over the tables.

Three Irish provinces sit at the top of their pools. And the only province that isn't, Connacht, came within a gnat's crotchet of beating Gloucester at Kingsholm, a location not exactly known for its warm welcome.

The cap will lose some of its potency as an excuse next season when it rises. A more compelling explanation for the Anglo-Irish divide, I think, is that the provinces don't have to worry about demotion from the relegation-free Pro12.

If English sides want a level playing field, the Premiership needs a fixed composition. Until then, the dice are unfairly loaded against them.
Posted by Tom Bradshaw at 15:24 1 comment: