An alarming brush with concussion has prompted Bath Rugby's Sam Vesty to call for the game's authorities to take action to reduce the number of head injuries.

Vesty, who is Bath's representative on the Rugby Players' Association management board, fears the game could be sitting on a dementia time bomb. 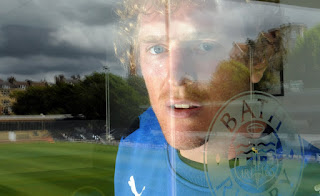 ​He has spoken out after being concussed while playing against his former club, Leicester Tigers, at The Rec on October 1.

The 29-year-old suffered worrying symptoms for a fortnight after taking a blow to the head from Boris Stankovich. The prop was cited for the tackle but was not banned.

Following the impact, Vesty was unable to concentrate in training, felt dizzy whenever he exercised and struggled to stay awake during the day.

Vesty says he was in excellent hands with the Bath Rugby medical team but wants to see procedures tightened across the game.

The twice-capped fly half believes dangerous tackles should be more rigorously policed and has suggested that the number of games played per season in England should be reduced to ease the demands on players.

Vesty said of his experience:

"It was worrying. There is a lot of research in America, some of which shows that American footballers are 19 times more likely to get dementia than the ordinary person, and rugby union is not a million miles away from that.


"From a long-term perspective, it's an issue the game needs to look at.

"I don't think there was anything malicious in the blow I received, it was just one of those things you get every now and again in rugby – a head knock.

"I felt groggy and was sleeping during the day, which is something I never do. Any time I tried to do any exercise I felt dizzy and I couldn't concentrate on the ball.

"I'd been knocked out before but I'd been fine then, so nothing like this had really happened to me."

The International Rugby Board currently has a policy of 'graduated return to play' following concussion, whereby a player undergoes a steady reintroduction to contact sessions. In the Premiership, players also have to pass a series of cognitive tests before they can return to action.

Vesty, who made his comeback off the bench against Worcester on October 22 and featured in the starting XV that beat London Irish on Saturday, continued: "There is medical protocol in place now but it just needs to be adhered to. They maybe also need to look into how many knocks you get in training and how many games you play a year.

"All these things have an impact on a player but we don't know what the repercussions are. There are some studies coming out that are a little bit worrying.

"It's not just me. A lot of the rugby public are looking into it. It's getting addressed and getting looked at and I think it's very important."

The issue is high up the agenda at Bath, with three players at the club having suffered blows to the head in October. As well as Vesty, Francois Louw and Tom Biggs suffered high challenges that floored them.

Club chief executive Nick Blofeld said: "We have had three incidents recently and are very conscious of this issue. Our medical staff are very hot on it.

"Our concern with Francois Louw is that it looked a nasty challenge and the player wasn't cited."

Vesty's position on the RPA's board gives his views weight and after the Chronicle raised his concerns with Premiership Rugby, the organisation offered to hold further talks with players.

A Premiership Rugby Ltd spokeswoman said: "Phil Winstanley (PRL rugby director) will be discussing with the Rugby Players' Association whether there's anything more that we should be doing."

An IRB spokesman said he was pleased a player of Vesty's prominence was bringing attention to the issue: “Education is key and it is great to see the RPA taking a leading role in educating its membership on the implications of concussion.”

“Every elite player over the age of 18 undergoes a baseline CogSport test annually and can only return to play if they pass the test,” said a spokesman. “‘Rushing’ a player back to player is against regulation."

Posted by Tom Bradshaw at 10:09 No comments: Links to this post