Come on, RFU, get tough

If the Rugby Football Union is really serious about improving the image of the game, then it could start be addressing some of the disgraceful scenes that unfolded at the end of Bath's loss to Wasps on Sunday.

And it could also start handing out meaningful sanctions for odious acts of thuggery on the pitch.

It's all very well setting up a task group that will probe past examples of cheating in an effort to burnish union's tarnished reputation, but it is infringements in the here and now that need to be adequately addressed too.

Firstly, there's the matter of referee Chris White failing to penalise Wasps for hollering at Bath fly-half Ryan Davis as he lined up his potentially match-tying conversion attempt at The Rec on Saturday.

These weren't quiet mutterings from the Wasps players. These were shouts deliberately timed to put Davis off his game.

This wasn't 'gamesmanship'. This was illegal.

White should have given Davis the opportunity to prepare his build-up again and banned the Wasps players from charging.

Another Davis – Brad, the Bath assistant coach – was magnanimous this week when I asked him about the incident.

"That's not the reason we failed to draw the game," he said. "We need to worry about our performance in attack and defence. If we get those things right we are a good enough side to climb the table."

In one respect, Brad is right. It's water under the bridge now and Bath need to concentrate on their own manifold shortcomings rather than casting around for excuses.

But imagine if Wasps had been punished and Ryan had been given the chance to take the kick without distraction. If he'd landed that, then the young fly-half would have received a terrific, timely confidence boost, as well as bagging an extra point for his team.

If Wasps' antics before the kick were bad enough, David Lemi's 'celebrations' after the kick went wide were appalling. Photographs show the winger giving the crowd and Bath players a double one-fingered salute.

The former Bristol winger issued a gushing apology yesterday, in which he used the hackneyed mitigation of 'I got a bit carried away in the heat of the moment and was very emotional'.

If the image of Lemi jumping in the air with middle fingers aloft was a PR disaster for the game, then the RFU failing to punish him for the gesture is an even bigger one.

Like many involved in the game, I'd been expecting the Union – given the events of the summer – to come down like a tonne of bricks on any wayward on-pitch behaviour. But not a bit of it.

On Tuesday, Gloucester flanker Andy Hazell was given a pathetic one-week ban for taking aim and stamping on the back of Julian Salvi's leg. And all this despite the mid-range sanction for stamping being five weeks, the lower end two. Hazell is a lucky man.

The RFU needs to bare its teeth more, otherwise the scourge of stamping, gouging and other nefarious practices will continue to blight the game.

Posted by Tom Bradshaw at 10:37 No comments:

I can now be heard every Thursday afternoon on Bath FM talking about all things Bath Rugby. Tune in to 107.9FM between 4.40pm and 5pm.
Posted by Tom Bradshaw at 10:33 No comments:

Will Bath be there or thereabouts this season? 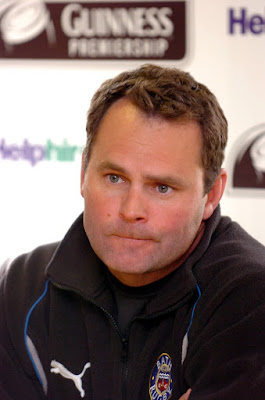 Is it telling that Steve Meehan - publicly at least - isn’t setting his side any long-term goals?
The Bath head coach was reluctant to say after the Scarlets game on Friday that his aim for the forthcoming season was to win the Guinness Premiership and the Heineken Cup. Instead, he explained that he wanted to see his players behave well on and off the pitch.
If that happened, he said, then he believed that Bath Rugby would be “there or thereabouts” come the end of the season.
Clearly, Meehan is playing down expectations.
Can we take it, then, that the Australian doesn’t expect to be bringing any silverware back to The Rec come May 2010?
Well. whatever Meehan’s private thoughts, his decision not to overstate his hopes for the forthcoming season is probably wise and, given the circumstances, appropriate.
After so many enforced changes, it would be rash indeed for any head coach to confidently assert that his side was about to sweep aside all before it.
And it would be even more rash when one considers the forbidding start that Bath have for their Premiership campaign.
Bath’s first five games see them take on Gloucester, Sale and Harlequins away and Wasps and Leicester at home. If that’s not a disconcerting start to the season, then I don’t know what is.
It’s made even more disconcerting when one considers the statistic that Bath have won just one of their last six away Premiership fixtures.
Meehan, however, is refusing to be daunted and is looking on the bright side. Get off to a flier against sides such as that, he reasons, then your set up nicely for the rest of the season.
But however much the Bath boss says he is relishing getting stuck into the Premiership titans, it’s going to be a big test - and one that could determine the course of Bath’s season.
As Wasps illustrated last season, get off to a poor start and - no matter how many big names you have in your squad - it’s mighty hard to build momentum and get yourselves back in contention.
If Bath are to be contenders this season, then they need to maintain the strong home form that turned The Rec into something of a fortress last term. A side that grabs four or five points from every home game and manages to steal the odd win when it’s on the road will never be far from contention.
A fit Bath side this season that fires anywhere close to all cylinders will be hard to beat. In the backs, a line-up of Claassens, James, Banahan, Barkley, Hape, Maddock and Abendanon will surely put the fear of God into any backline in Europe, threatening as it does with speed, boot and off-load.
But of course injury means that the dream line-up, until December at least, is off the cards. Bath’s success in the opening games of the season thus hinges on how Ryan Davis - backed up by Nicky Little - orchestrates things from fly-half and how trusty his sometimes wayward boot is. In James and Barkley’s absence, Bath will also have to find a settled centre partnership. I would suggest playing the guileful Shontayne Hape at 12 and the more direct Matt Carraro at 13.
In the pack, the front row looks formidable with the arrival of Davey Wilson and there’s plenty of depth at hooker for Bath to cope should Lee Mears have another busy year of international activity. And the second row - and the pack as a whole - will be boosted by the grit that a fit-again Danny Grewcock brings.
Once it truly gels, the Bath back row should also be dominant, but there are still some question marks over its effectiveness at the breakdown. It’s an area that’s getting a lot of attention on the Bath training paddock at the moment.
But should Bath get this area ticking and present quick ball for their backs, then you’d be churlish to bet against a top four finish.