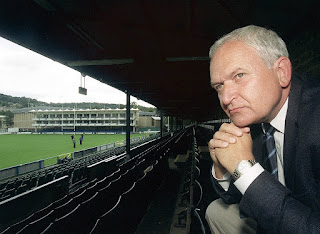 The following is taken from my exclusive interview with departing Bath Rugby boss Bob Calleja. For a longer interview see my piece on the Chronicle's website. For the full warts and all piece, see today's Bath Chronicle


Bath Rugby are turning to the Church in an effort to provide greater pastoral support for players.

The club are in the process of securing the services of a local vicar who would offer a confidential counselling service.

The club have been in discussions with the Rev Martin Lloyd-Williams, rector of St Michael's Church in Broad Street.

Chief operating officer Bob Calleja, who leaves Bath at the end of the month after 11 years at the Rec, believes all clubs in the Aviva Premiership need to improve their provision when it comes to player welfare.

In an exclusive, wide-ranging interview in today's Chronicle, Calleja, speaks frankly about the highs and lows of his time at The Rec.

He describes last summer's drugs scandal at the club as "the darkest moment – diabolical", and speaks passionately about the need for greater off-field support for players.

"Some clubs have adopted the local vicar to offer a confidential, counselling service," said Calleja. "We are starting on it.

"Martin at St Michael's has often offered his services to help. Nick Blofeld [chief executive] is looking at it to see if we can set that up on a permanent basis.

"Players have to have someone who they respect that they can talk to in confidence.

"In the past some players have come to me, some have been to the head coach.

"There are problems. These are young men who sometimes have all sorts of problems and you try to help them."

Calleja, who is in negotiations with Premiership Rugby about taking up a role which would encompass conduct and player welfare, warns that gambling could be the next vice to undermine the game unless it is tackled swiftly.

"Gambling is the next issue that really has to be addressed," he said. "There's not a gambling problem at Bath but there is one generally in professional sport.

"Players have a lot of spare time and are reasonably well off. There has to be a lot more work done on helping players avoid gambling addiction. It's next on the agenda." While stressing that he is not aware of any problems at Bath, Calleja added: "Some of them play cards, and the only advice I ever gave to one of the young lads when they were playing poker was 'don't play with anyone who earns more than you do'."
Posted by Tom Bradshaw at 17:27