Rugby - a game for gentlemen? 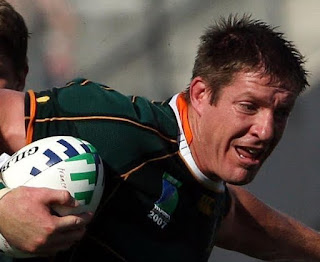 With such an unedifying array of thuggery displayed on the pitch from time to time, can it really be maintained – as the old adage has it – that rugby is a game played by gentlemen with oddly-shaped balls?

There was a chorus of unquestionably justified disgust and disquiet following Stade Francais' display of eye-gouging during last season's Heineken Cup match against Ulster.

Now the perpetration of another on-field sin is sullying the game – the headbutt. Actually, that's not quite right. It's the cowardly, sneaky headbutt.


Fans around the world have seen the slow-mo footage of Springbok lock forward Bakkies Botha's butt on the All Blacks' Jimmy Cowan in the opening match of the Tri-Nations.

And you don't need to be a citing commissioner or disciplinary panel judge to grasp that what Botha committed was a Neanderthal act of assault, more in keeping with the law of the jungle than the law of rugby union.

Botha's butt elicited the same reaction in me as an eye-gouge because, like a gouge, it was committed against a defenceless prey.

Cowan was lying on his stomach with his back to Botha when the big South African, pictured, decided to butt him. Well 'ard, Bakkies, well 'ard.

If a Millwall FC fan performed such a sickening act on a rival fan – let alone a player performing it on another player – the howls of derision and outrage would shake the very foundations of Wembley.

But an international lock of the highest order does it and there are still some who shrug their shoulders and say 'forwards will be forwards – it's part of the game'.

Not good enough. Rugby players aren't the sporting equivalent of foreign diplomats, they don't have immunity from prosecution for the 80 minutes a week they spend on a rectangular pitch.

It's time for the authorities to start using a bit more stick and that may require a criminal prosecution for common assault or actual bodily harm in the not too distant future.

A rugby stadium is not the Circus Maximus. We gather to watch episodes of controlled aggression, not displays of last-man-standing brutality that would in the normal course of things secure one a night in the slammer. Our gladiators are athletes, not machines primed for maiming.

Rugby's a fierce contact sport, set apart by its spectacular collisions and the strength of its players. That's why I enjoy it.

But, please, let's cut out the illegal violence.
Posted by Tom Bradshaw at 12:04