Sam Vesty's the new lord of the manor at Bath 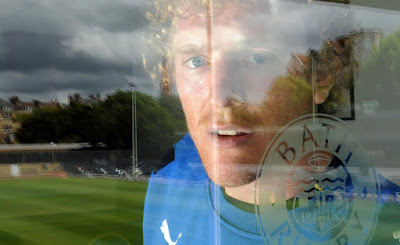 Sam Vesty may have been at Bath Rugby for less than a month, but he is already lording it over his team-mates.
The 28-year-old is currently slumming it at Farleigh House - the country residence that's at the heart of Bath's new 130-acre headquarters in Farleigh Hungerford, nine miles outside the city.
Bath chairman Bruce Craig took out a long-term lease on the imposing Somerset country estate when he bought the club in April.
The house and its grounds are currently being adapted so they can accommodate the club's entire backroom staff, as well as all the training facilities.
Planning permission from Mendip District Council is expected imminently for the club to create pitches at the site. Turf will then be brought in and a draining tank installed, with a view to the first-team beginning training there in October.
Vesty's wife and three children are due to arrive from Leicester next week, but until then he is residing on his own at Farleigh House.
The Gothic Revival house looks like a plausible setting for a creepy Edgar Allan Poe tale, and Vesty admits the supernatural sometimes feels pretty close to hand.
“I feel like the master of the estate, but it can be scary in the middle of the night. When the fire alarm went off the other night I genuinely thought there was a ghost!"
Vesty has joined Bath from arch-rivals Leicester Tigers, and while he admits it's been a bit of a wrench leaving his home city, he's rubbing his hands at the prospect of a fresh start in the West Country.
“Bath Rugby’s an amazingly exciting place to be at the moment with the new training facilities and the new players. And the work ethic around the place has been amazing, from the youngest to the oldest," he said.
Among those new players is his old Leicester mucker Lewis Moody, who also made the move from the Midlands to Bath over the summer.
The England skipper is set for his first formal training session with his new club on Monday.
“Lewis brings a certain intensity to training which is good for any team," said Vesty. "It will be good for the team having him around.”
Vesty has revelled in the amount of ball-handling involved in Bath's pre-season training sessions and is relishing Bath's pre-season camp in Provence in the first week of August.
The week will culminate with a match against French second-tier outfit Pays d'Aix RC on August 6.
“It won’t be a holiday - I’ve seen a bit of the schedule!
"It’s exciting because it will be the first time I put a Bath shirt on and a chance to do all the things that we’ve been working hard at."

"Bath will reinvigorate me" - for the full interview with Sam Vesty and his thoughts on where he sees himself playing at Bath, see the July 22 Bath Chronicle
Posted by Tom Bradshaw at 16:41